A lot has been said about finding one’s own path and true calling in life. In fact, we’re bombarded by all kinds of advice, motivational posters, gifs, and whatnot, set against stock photo sunrises and featuring platitudes from people like Paulo Coelho. If you ask me, if you are in the middle of that search, it might be more important to find the wrong paths than the right ones. You need to discover your own mediocrity.

I have been mulling over this idea of accepting one’s mediocrity for more than ten years now – ever since design college. But I never got around to writing about it. By now you have probably read about the ‘CV of failures’ published by Johannes Haushofer. He got the idea from Melanie Stefan’s 2010 article in Nature, and it’s clear that there are many others who share their feelings. Their point is that coping with failure is an integral part of being an academic, even though most of us tend to hide our shortcomings. I think the same applies also to designers and, especially, design students. So now that the issue is topical it is the perfect time to add my two cents to the discussion.

It was one of those unremarkable days in college when I was studying graphic design. I was headed out to lunch together with my friend Marko and we started talking about our possible futures. It was our second or third year so we already had gained a relatively good understanding of the different paths a graphic designer could take.

I said that I had realised that I could never be a really good advertising graphic designer. I just couldn’t do that kind of cool, slightly arty design. Whereas it was clear that there were other people in our class, Marko included, who produced gorgeous commercial looking pieces. It also didn’t enjoy advertising related courses that much. I was much happier doing everything else. If I had to, I probably could make a career in advertising design. But I would never become one of the gurus. I could only be a mediocre designer in that field.

Admitting this was hard. When I entered the school, I thought that the advertising world was one of those key destinations for graphic designers. I feared that if I didn’t have what it took to work in advertising, I must be a failed graphic designer in some sense.

Of course, at this point, I had already worked in a newspaper as a layout compositor. So I knew there were definitely some paths I could take. But, I laughed a little nervously, I can say goodbye to the world of glamour and champagne at the office. Although it was just a joke, some part of me still believed advertising work to be more glamorous than other design jobs. (Shows how little students know about reality!)

We continued the discussion as we walked, commenting on areas where we excelled or fared less well. In the end we agreed that it didn’t really matter if we couldn’t do everything perfectly. After all, nobody really needs to master all the possible sub-areas of their field. Some designers become illustrators, some work in advertising, and others design books.

The important thing was to find the right specialisation. This meant that trying to master everything might actually be counterproductive. So instead of struggling with advertising, I should put my energy to better use.

But there was a catch. As a student or a fledgling designer it is not easy to recognise what that specialisation should be. So instead, the best thing for you may be to find what you aren’t good at. It might not show you your future path exactly, but at least it narrows down your options. It helps you focus your energies roughly in the right direction.

Therefore, we concluded, the really important thing for design students in their second or third year was to find their own mediocrity. They should look at their own work and experimentations in different sub-areas critically. And admit to themselves the areas they did less well in.

And then we had lunch.

I think that discussion helped me relax about my choices and the possible directions I might take. Of course, all of these worries went away as I grew more confident in my own skills and career. Only a couple of years later, I was comfortably working in the newspaper industry as a graphic journalist. I had no doubts about my specialism because by then I was, even if I say so myself, pretty damn good at my job.

Later I decided to switch to teaching and research, but that had nothing to do with doubts about my skills. I just realised I couldn’t imagine myself working in the newspaper industry until I retired. Whereas I enjoy teaching so much that I might end up doing it until I drop.

Today, I feel confident because I have had two good careers. I have no problem talking about my history in the design industry. I’m just trying to come up with more and more sarcastic replies to cliché comments like ‘those who can’t do, teach’.

And interestingly even advertising appeared back into my life despite my attempts to stay away from it. I never did become a graphic designer in advertising. But as I progressed into more and more theoretical areas in design, I ended up studying and writing about things like branding and corporate identities. Eventually I found myself teaching advertising – conceptually but not graphically. And I am completely comfortable with that. I find it interesting and I have the right kind of conceptually oriented brain for it.

But not everyone has been as lucky as me or Marko, who continues as a successful designer to this day. Some of my classmates and friends didn’t recognise possible dead ends until it was too late. After college they went on to work in fields where they did not succeed and possibly hated every minute of their work. Many got disillusioned, left the media industry altogether, and struggled to find something else. Some of them are still searching for the right path.

Of course, it’s not possible to foresee the future and avoid every bump in life. My life hasn’t been perfect either and I’m not saying I don’t have any regrets.

But I have decided that I will encourage my students to discover their own mediocrity and accept it. Even if they don’t find the perfect path for themselves, accepting problem areas might help them avoid some of the painful experiences in life. Maybe.

At least it can’t be any less helpful than staring at stock photo sunrises and quotes from Coelho. 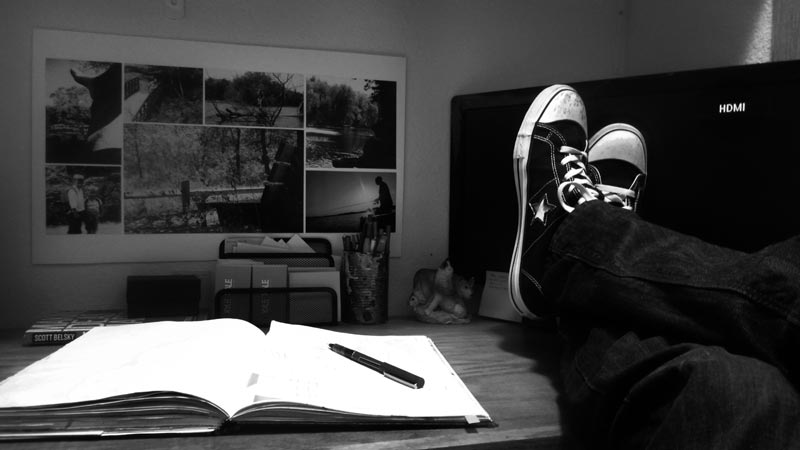