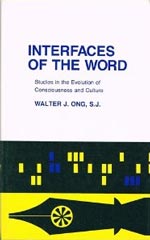 I came up with this when I was going through Walter J. Ong’s book Interfaces of the Word. I was taking notes and just made a typo while writing the word individual. I started to correct it and suddenly realised how brilliant the new word was.

Ong’s later book Orality and Literacy was perhaps more generally interesting as an overall media philosophy, the Interfaces relates directly to my PhD project. Especially chapter 2, where Ong makes the point that the writer’s audience is always a fiction.

Ong concentrates the written word but I will take some of his ideas and use them on visual communication. And so this accidentally born neologism is perfect.

Ong argues that writers do not really imagine their readers individually but in a more generalised way. I would use the word audience, but according to Ong this would be wrong:

But it is not impossible for us to imagine an individual reader or several of them and compare their experiences. Like companies and advertising agencies create several types of imagined customers and try to guess how these will react to the product or campaign.

So in the same way we can imagine an individual user and how he or she experiences some visual product, artefact or whatever we ship out. And we must accept that there will be indivisual differences between users.

And thank you Timothy Donaldson a.k.a. Relentless Neologist for encouraging the creation of neologisms. 😉