I’m going to write my next essay on newspapers of the first and second World Wars. Going through the papers in the Department collections has been really rewarding.

Here is one of the gems so far: An advertisement for a Burroughs adding machine from 1915. The chauvinism is so horrible, it’s actually kind of funny. Of course, it’s only funny because it’s hundred years old.

Underneath you see a detail photo of the first two paragraphs, where the creepiest or funniest stuff is.

“Parliament can do anything except change a man into a woman.” This is one of the oldest saws of constitutional law.

But we claim that we can change a woman into a man for business purposes. Every employer who is substituting women clerks for men is praying for that very miracle at this moment.

Nine-tenths of the routine work of accountancy is totting up. Now, women are good at much office work, but they cannot add up. You can hardly blame them. It takes years of training and practice for a man to acquire the art of adding up quickly and accurately. It is both skilled work and responsible work, and you are trying to replace trained men by untrained girls.

While the demeaning attitude is hilariously creepy, the ending of the ad is funny because it implies that the men it praises are actually disposable. You don’t need any men in your office. Just diligent women and some technology. Doesn’t that kind of defeat all those claims about male superiority? The ad is also interesting because it paints women as the main users of new technology. Something which we, even today, don’t see often enough.

Woman’s patient drudgery combined with a Burroughs Adding Machine can do more than the smartest man at figures you ever had in your office. 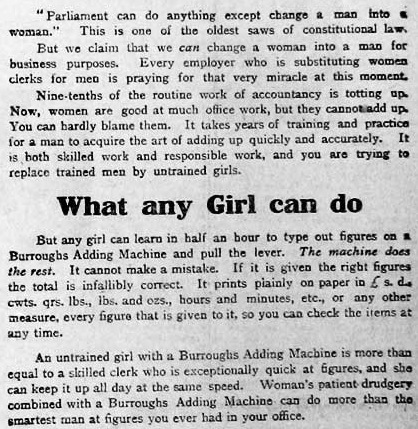