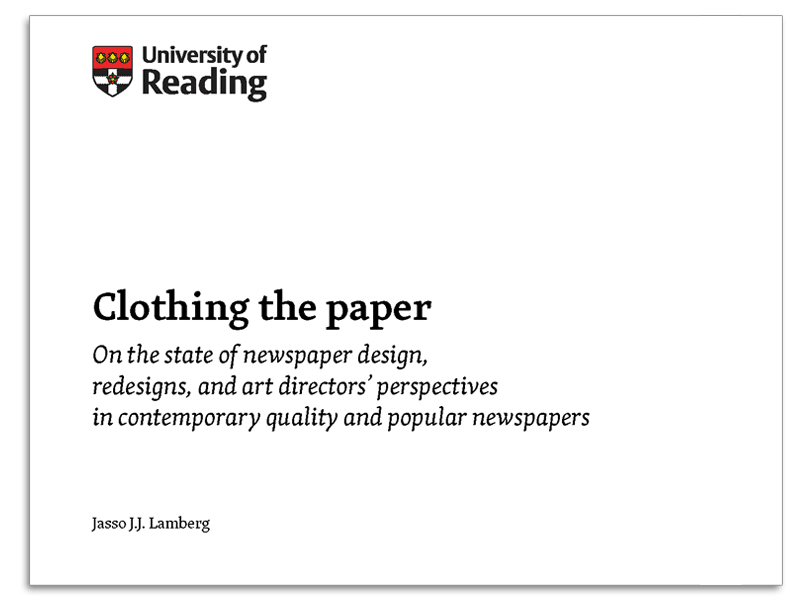 Download the full thesis as a PDF (about 3.5 MB)

No print copies are available at the moment. If you wish to print it for yourself, you might prefer to download the full thesis as a PDF formatted for double-sided printing (about 3.5 MB). I recommend taking it to your corner copy-and-print shop and having them do a ring/spiral binding. In the right shop one copy should cost you only about 15–20 euros (£12–15).

This thesis contributes to understanding contemporary newspaper design and redesigns in quality and popular newspapers with a focus on art directors’ perspective. A triangulated multi-method investigation of newspapers in the United Kingdom and Finland produces several original contributions to knowledge.

As little data exists on contemporary newspaper design in these countries, a content analysis of newspapers captures a snapshot of its current state. This reveals design elements that function as genre markers and cross-national differences in their use. Quality papers use a more rule-governed design employing a narrow range of expression, while the populars employ a wider range of expression.

In both genres, art directors rely largely on their professional intuition in making design decisions. They might use metaphorical newspaper personalities, possibly as energy-saving devices similar to genre. They see several roles for newspaper design, including journalism and enhancing usability. They acknowledge a connection between design and branding, but no evidence is found that newspaper design has been taken over by branding. Art directors are shown to be the true gatekeepers of redesigns, as executives leading the process usually entrust them with final decisions.

I present a naturalistic reconceptualisation of newspaper design, taking steps towards a conceptual framework for the currently pre-paradigmatic field. I propose using the concept of visual energy for summarising the effect of design features, which can be used to describe the relative positions of newspapers and their genres.

The work has been checked, rechecked, examined, and re-examined, and proof-read by three people but nothing is ever perfect. If you find typos or other funky mistakes I would appreciate if you’d let me know.